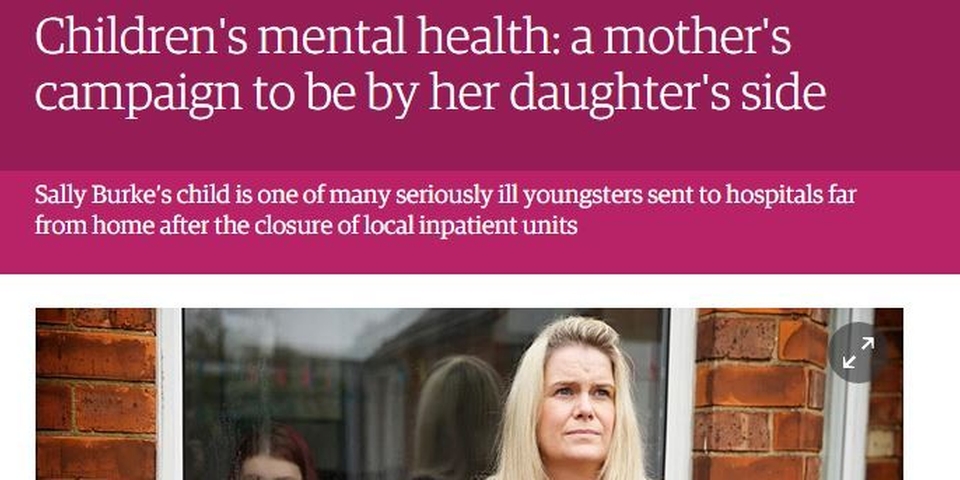 Request: A safer bed and help with travel costs

This week, 52 Lives would like to help a 14 year old girl from Hull and her mum Sally.

They were nominated by a close family friend of Sally’s. When I read the request I felt sick to my stomach – that’s the only way I can describe it. It said her daughter needed 'a bed that she wouldn't be able to harm herself with and nothing she could hang herself from.‘

She is a bright and talented girl, who has autism and complex mental health issues. These only came to light in the last two years, and ever since then they have been through a traumatic time.

Local mental health facilities near Sally were closed down 3 years ago, so her daughter has been sent to specialists hospitals all over the country. She has been admitted six times – once for 6 months.

Sally feels strongly that these admissions have worsened her daughter's issues rather than improved them. She said her daughter mimics behaviours of those she has been around - cutting, burning, ligaturing, punching…all picked up from her times in mental health facilities.

The impact this has had on their lives has been devastating. Sally gave up her teaching job so she could help her daughter, and has been struggling financially ever since. She recently lost her rented house, and has moved into a council house. It doesn't have any floor coverings at all, and every room needs complete redecorating due to a recent rewire. She's trying to save for this, as well as trying to find the money each week for petrol so she can make the 101 mile journey to visit her daughter twice a week.

When she is home, her daughter sleeps on a mattress on the floor, where it is drafty and cold. Her old bed had a post which her daughter tried to hang herself from, but thankfully Sally found her and freed her before she damaged herself.

Since her daughter’s illness was diagnosed, Sally has been campaigning tirelessly for more funding for local mental health facilities, so children can be kept closer to home (read more about her story in The Guardian)

Their situation is horrific and they are very much in need of some kindness.

When I asked Sally what would be of most help, she said it was simply a bed for her daughter.

“The reasons I can give you to convince you that she deserves her own comfy bed in the sanctuary of a bedroom are endless and horrific. This child is traumatised and homesick, she needs her own space which is comfy and relaxing and just for her.”

We would love to help and have asked Sally to set up a fundraising page so she can buy the bed she has chosen. And extra money raised will be used to help Sally with her home repairs, and for petrol costs to visit her daughter. Please donate if you are able to, but even just sharing this story would be a big help.

Thank to the kindness of people all over the world, we were able to give Sally and Maisie...

£1510 in donations - Sally set a target of £550 so they could buy the new bed. But with your generosity we almost tripled it! The excess will help Sally redecorate their new home and visit her daughter without having to worry about the petrol money.

More than 75 Gifts and Gift Cards from Amazon - Sally's daughter has been showered in gifts over the past few weeks, with parcels arriving every day. It has meant the world to her

Bedroom furniture - thanks to a very kind anonymous donor who won't let us thank him.

Thankyou so much to every single one of you who donated, sent a gift, or helped to share the story. And a special thanks also to Ann Ross for her help and advice on funding options available for Sally.

They were in desperate need of kindness and your generosity made them feel loved and supported during the toughest time of their life.