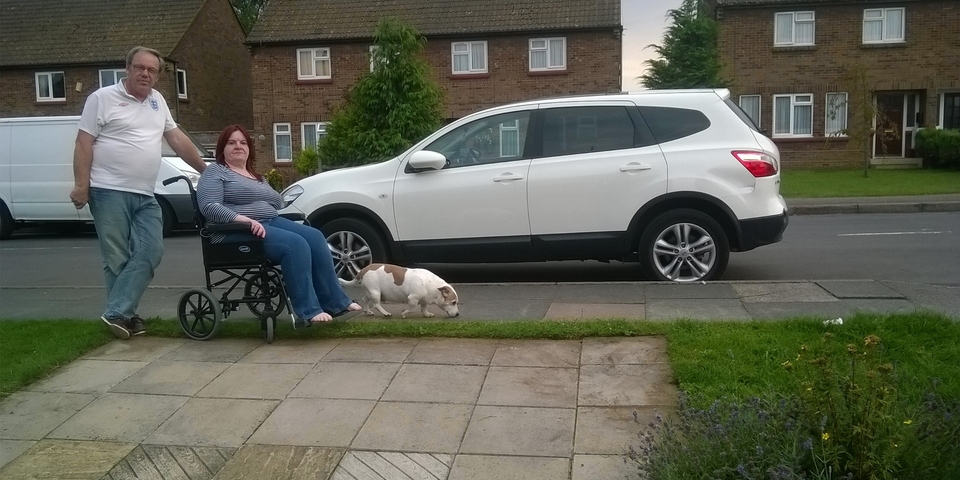 This week, 52 Lives would like to help a 56 year old man called Alan, from Dunstable. Alan was nominated by his wife of 15 years, Alyson.

Not long after they were married, Alyson became unwell. She had months of doctor’s appointments, tests and MRIs. The results were inconclusive but pointed to MS. Alyson kept the results to herself, and carried on working two jobs for a few more months. She started to have seizures, meaning she could no longer drive and eventually she had to give up working altogether.

Alyson was then diagnosed with Fibromyalgia and Chronic Inflammatory Demyelinating Poly neuropathy, and also has been suffering with depression and other mental health issues.

She began to deteriorate, and life became much tougher for her. After one particularly bad seizure, Alan came home to find Alyson laying hurt on the floor. It was that moment he realised he couldn’t let this continue. They tried to hire a carer, but it was a struggle financially. They had more going out than coming in and the small amount of savings they had soon dwindled. So Alan made the decision to give up work to care for Alyson fulltime.

So, since that time Alan has cared for Alyson all day, every day. He gets her out of bed in the morning showered and dressed, cooks for her, cleans….he devotes himself entirely to anything and everything she needs.

When Alyson contacted 52 Lives, she wrote that it is often people who are disabled or ill who are offered help. But that behind every single one is a carer who gives love, care, time and help without expecting any thanks.

Alyson and Alan have been through so much. The situation they’re in would put a strain on any relationship, but the love and respect they have for each other is just beautiful - and very obvious from every single thing she says about Alan.

“I don’t know what my son and I would have done without Alan. Things are tough financially, so there are not a lot of treats but we spend time together and we laugh a lot (usually at me when I have said or done something silly). Alan really is one in a million and the love I have for him is immeasurable.”

We think Alan is amazing and we would love to shower him with some kindness!

- Gifts and almost £300 in Amazon gift cards - Alan was given the surprise of his life when he opened to door to huge piles of Amazon parcels, sent to him by strangers all over the world (including Nicola Reddy and Tracy Richardson). Amazon doesn’t give me everybody’s details, so I can’t thank you all by name, but thankyou so much to every single one of you who bought a gift for Alan. He isn’t the type of man who does much for himself, so your kindness had him in tears.

- Zoo pass - Alan and Alyson also received donations to enable them to buy the zoo pass for Alan. A big thankyou to Cheryl Huxley, Morira Scott, Katie Jones, T. Bullas and Sandra Dorey, and all of the anonymous donors. And I know many of you offered to cover the cost if they didn’t receive enough donations – thank you to every single one of you as well!

- World Cup Rugby tickets – The very generous Dave Beech and Anna Rogers donated their World Cup Rugby Tickets to Alan and his son Jaimee. They were amazing seats, they had a wonderful day out and it absolutely made Alan’s whole year! And Dave thankyou for making a mad dash to the post office to get them to us in time for the big day!

- Rugby Ball – We were contacted by a kind company, LV (http://www.lv.com/) , who donated a branded Rugby Ball to Alan. Thanks to everyone at LV, and a special thanks to Sue Bartlett for organising this.

- Fish and Flowers! – And finally, there is a man called Paul Hopwood who owns a wholesale and retail fishmongers called The Chubby Monger (http://www.thechubbymonger.com/). Paul has helped a lot of people in recent weeks, but never lets me thank him or his company. Paul contacted me when he read Alan’s story and invited Alyson and Alan into his shop. He stocked them with plenty of fresh fish, which has helped them enormously. He also found out it was Alyson’s birthday and had a huge bouquet of flowers waiting for her. Paul you are such a lovely man. Thankyou so much for doing this for them. You made them feel very special and they won’t forget it. 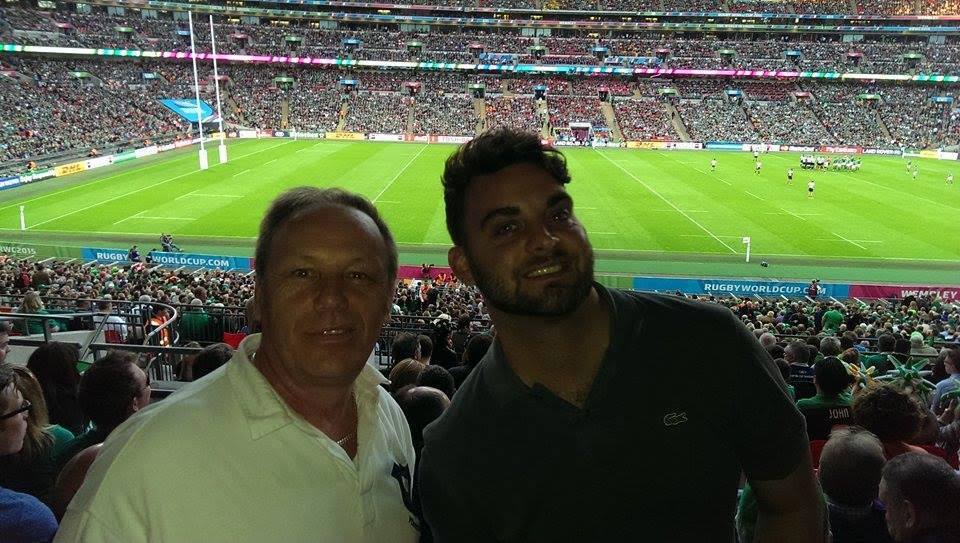 "I've kept every message. And on my bad days, I get the messages and reread them. The words from complete strangers are enough to lift my day...the messages meant more than the gifts." 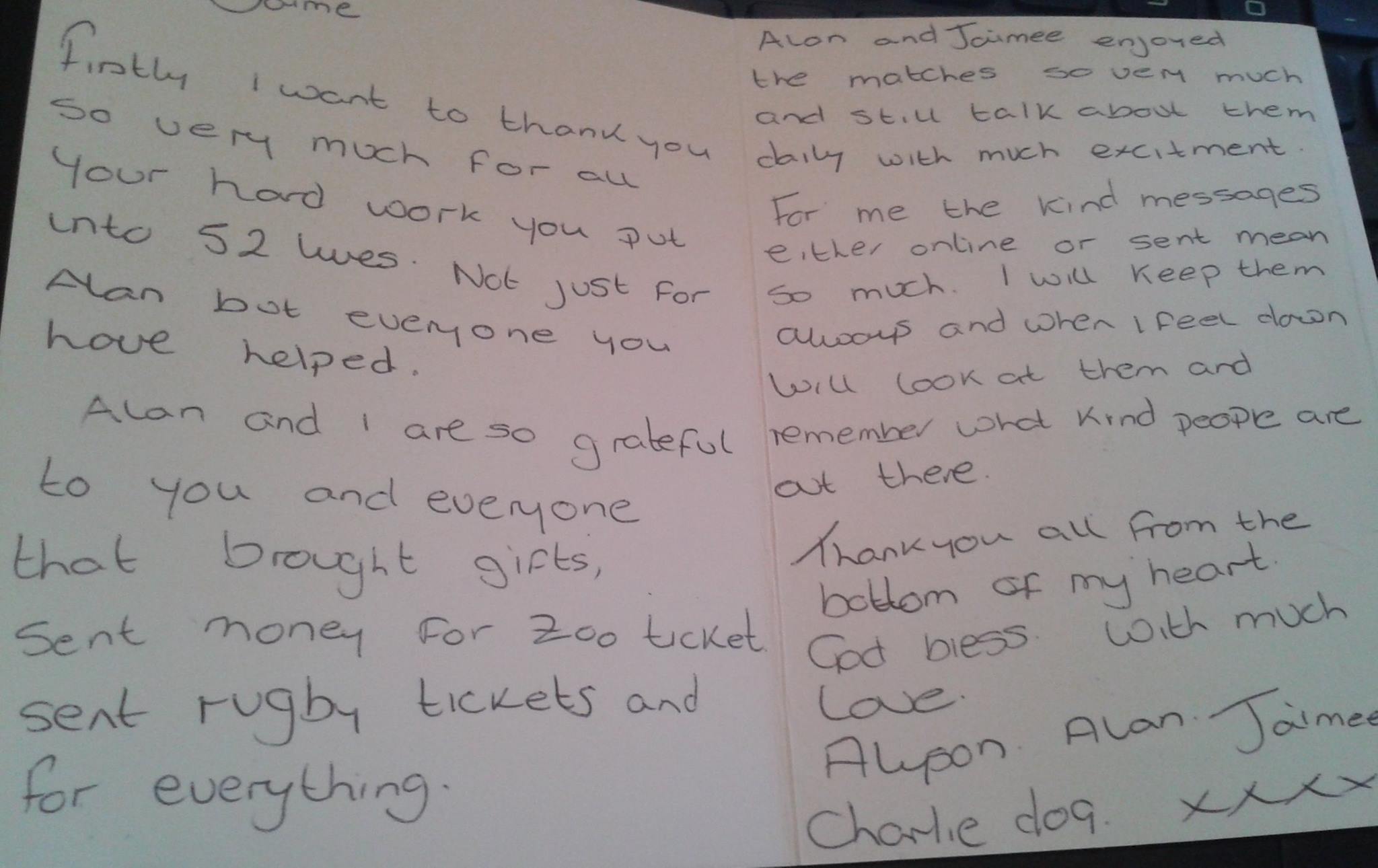