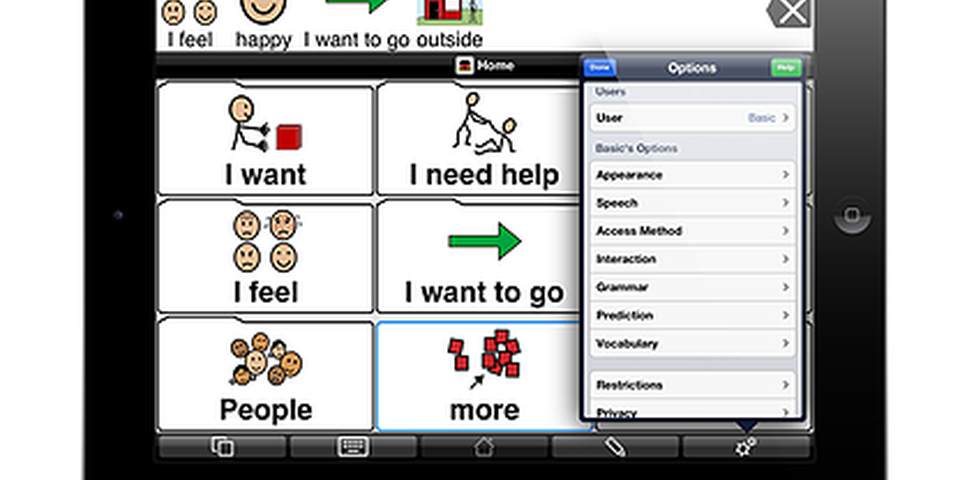 Request: An iPad, to give Sarah a voice for the first time / and outdoor furniture.

Sarah is a 32 year old woman from Shepperton in the UK. Sarah is cared for full-time by her mum, Carol.

Soon after Sarah was born, she was diagnosed with a severe learning disability. Carol was told her daughter would require full-time care and support every day, for the rest of her life. She also has other medical issues, which mean she is in often in pain.

Carol had 4 other children to care for as well. She wasn’t sure how she would manage, but she was determined that Sarah would grow up alongside her brothers and sisters and that she would care for her full-time. Though her disabilities were a challenge, Sarah was a complete blessing to their lives – always smiling, laughing through her physical pain, and joining in with everything they did.

Carol had to leave Sarah’s dad when they were quite young, and so raised all 5 children on her own. She was working as a dental nurse, but left after she had her children. At one time, Carol sought some help, and sent Sarah to a day centre. However, one day while she was there, Sarah was physically attacked and became very withdrawn and scared. So since then Carol has kept Sarah at home, filling their days with lots of activities, fun and laughter.

Carol’s other children have been facing their own difficulties. Carol and Sarah live with Sarah’s brother, who also has a disability. Carol’s other son was recently diagnosed with a brain tumour, and is currently undergoing treatment.

And on top of all of that, Carol is not in the best of health herself at the moment. She has so much to deal with that I can’t even begin to imagine how she copes with it all, let alone manages to be a bright, positive force in her children’s lives. I would love to do something to help her.

Carol said the most life-changing help we could give them would be to enable Sarah to communicate. Sarah has a mental age of a 5-6 year old. She struggles to communicate, relying mostly on gestures and sounds.

It is frustrating for her, and for her family.

Sarah’s Speech and Language Therapist has recommended an app called Proloquo2Go – it is widely known as a voice for those who cannot speak. However, it requires an iPad - which Carol cannot afford.

When I asked what difference an iPad would make to Sarah’s life, Carol replied:

“It would give Sarah the voice she longs for…to be able to communicate freely with everyone around her on a daily basis. I wouldn’t have to worry when we go to the doctors, or out for the day, if she wanted to ask someone for help. She could communicate freely with her extended family. It would just open up the world to her in a new and exciting way.”

It doesn’t get much more life-changing than that.

We helped to buy an iPad and a communication app for a 32 year old woman with learning difficulties. It will give her the abilty to communicate properly for the first time in her life. We received £575 in gift cards, as well as a protective iPad cover and case.

When Sarah and her mum, Carol, stopped by to collect the gift cards, Carol was in shock. She said: "I just never knew people could be so kind."

You have all changed Sarah's life.

I wish to thank you from the bottom of my heart for all your marvellous work...
Sarah is beaming from ear to ear now. This is a dream come true!"