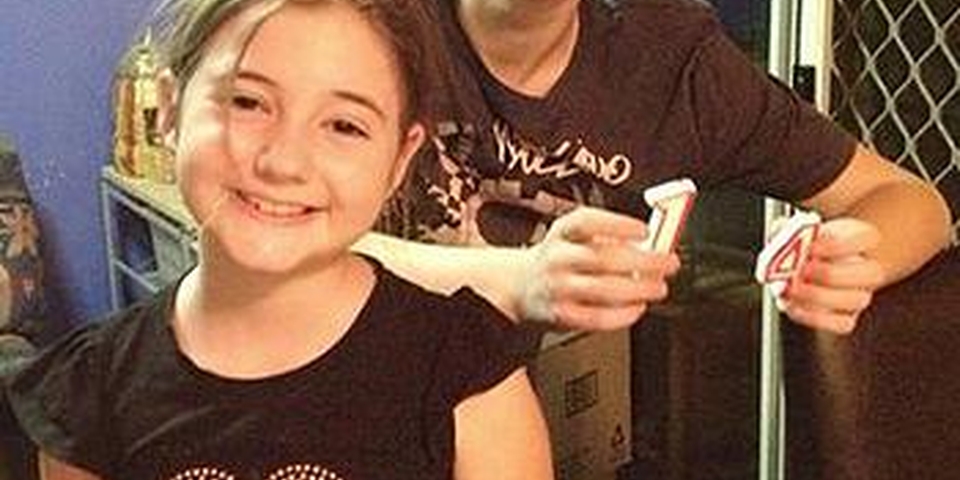 This week marks the end of the first year of 52 Lives. So it seemed fitting to go back to where it all began - with the beautiful Ollier family.

In week 1 of 52 Lives, we helped a young girl called Claire. Claire had brain cancer and we arranged for her to see Chitty Chitty Bang Bang at the theatre, gave her a beautiful party dress to wear and also sent her for a VIP Day at a theme park. Claire sadly passed away a few months later, at 9 years of age.

Claire's brother Liam is 15 years old. When he was just four, he asked for a baby sister... Claire arrived when he was 5. Claire adored Liam, and he her, but from an early age, she had the goods on him. She always knew how to push his buttons, and she loved doing it. Liam was really protective of Claire, and they were great mates. She was fearless, and he was just a little on the cautious side, so they made a great team.

When Claire fell ill, their mum and dad (Robert and Lynette) encouraged Liam to spend as much time with Claire as he could. They were aware of what an enormous burden that was for a 13 year old, but felt they had little choice but to tell him the truth.

Over the coming months, Liam was by Claire's side. He looked after her, gave way to her every request, played with her, watched tv with her, and reassured her. He willingly took a back seat during her illness.

It was Liam who was sitting behind Claire on a plane from Melbourne, when she suddenly lost consciousness. He stayed in place, assisting the doctor and nurse who were keeping her alive, and talking to Claire, reassuring her. Liam saw Claire being resuscitated in the emergency room, and less than 24 hours later, he was saying goodbye to his beautiful little sister as she lay in a hospital bed.

Liam did not attend school too often for the next few months and he lost a lot of weight. He was reluctant to grieve openly for fear of upsetting his mum and dad, who say they have been struggling to cope.

At Christmas, Liam went on a camp with CanTeen, a support organisation. There he met people like himself, who had lost siblings, or were in the process of losing them. The camp did something for Liam. He came back from it a different person, and he'd met a lovely girl called Caitlin, who's brother had passed away two months before Claire. Liam and Caitlin are now dating, and his parents are so grateful he has someone who can relate to what he's going through.

Liam has been through a lot and shown such immense bravery and selflessness for someone so young. 52 Lives would love to do something special for him.

The response was incredible, in so many ways. I know I tend to go on and on about the ripple effect that one kind act can have – but this week is absolute proof!

This is what we did…
1. Wicked Tickets:
A lovely woman called Janine offered helped so many times during the first year of 52 Lives (although she never let me thank her publicly). Janine was the 5th person that 52 Lives helped, and since that time, she never stopped giving back. Janine very sadly passed away in December. But her spirit of generosity lived on. When Janine's sister saw the request for theatre tickets, she got in touch to say she would like to buy the tickets for Liam and Caitlin. And so, they will be going to see Wicked in Brisbane later this month. Thank you so much Liz.

2. Tickets to Cirque du Soleil:
Matt from Mountain Creek, who has helped many times in the past, donated 4 amazing premium tickets to Cirque du Soleil for Liam, Caitlin, and Liam’s parents, Robert and Lynette. Matt, it was such a generous gesture and they are so excited about it. They were very emotional when I told them. Thank you for giving them such a wonderful gift.

3. Dinner:
Earlier this year, one of our corporate partnership projects – Cricks 12 Lives – helped a man called Stewart and his two daughters. Stewart recently lost his wife, Fiona, and he and his daughters had been through a very difficult few months. After receiving some wonderful support from Cricks, Stewart wanted to share the kindness and made a very generous donation so Caitlin and Liam could have dinner before the theatre. Thank you Stewart. With everything you’re going through, I think it’s incredible that you are taking the time to help other people.

4. A photo session: The lovely Tami Bass from Bass Photography Services, who did a brilliant shoot for Zane a few weeks ago, has also donated a photo session for Liam and Caitlin. Thankyou Tami!

5. And finally, a big thank you also to Lynda Roxanne Kingston, Carolyn Hoffman, and Cath Gladstone, who all very kindly offered donations towards Liam and Caitlin’s evening out. You’re all wonderful.