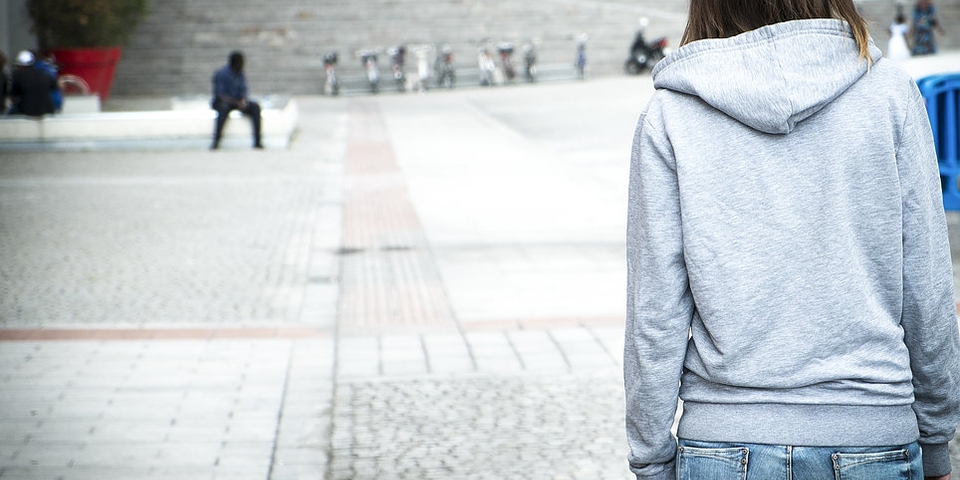 This week, we’d like to help an 18 year old woman from Leeds called Jodie.

Jodie was removed from her birth family and placed for adoption when she was a baby, as there were concerns about the care she was receiving. A family adopted her at age 4, as well as three other children. But Jodie struggled to settle in her adoptive family. She was feeling insecure, lacked confidence and found it hard to trust people. She also struggled socially and often felt worthless and rejected.

As she grew up, Jodie had no friends and argued with her adoptive parents on a daily basis. She began to self harm and developed anxiety and depression. When they argued, her adoptive parents often told her to leave...so Jodie spent a lot of time wandering around town. She found comfort in books and used spend her days alone at the local library. When Jodie turned 16, they asked her to leave home permanently, and requested that social services step in and support her.

Despite all of this, Jodie has worked hard and managed to enrol in university to study animal care. She has a passion for animals and it’s her dream work as a wildlife officer in a zoo. But day to day life is incredibly hard for her at the moment. Because her adoption broke down when she was 16, it means that she is not eligible for any of the financial help that she would have received if it had happened when she was 15. She is entirely dependent on her student loan, but it is barely enough to live on. When she started university, her social worker personally paid for the essentials she needed and she survived on donated food.

While her peers are enjoying student life, Jodie has a continual level of anxiety about money as she knows there is no safety net for her. She received no help from her adoptive family, and she also has to remain at uni on her own every single weekend and half term as there is nowhere for her to go.

Jodie has managed to get a job in a cafe for the summer holidays, which is helping a little. But during term time, finding work is difficult- especially as the college campus is isolated and Jodie doesn’t drive.

Jodie was nominated by her mental health worker, who told us Jodie is now at risk of losing her university place as she is struggling to cover the costs. Her social worker also visits her regularly , often taking her pasta and porridge to keep her going.

Jodie feels like there is nobody in the world she can depend on – financially or emotionally. With your help, we want to give her the support she needs.

The response was incredible. In just hours we hit the target, and you all kept donating. In total, we have raised almost £7000 for Jodie – I think that might be a new record!

The donations will help pay for Jodie’s accommodation for almost a year.

I know a lot of you were worried about how Jodie will manage in the longer term – and I’m very happy to say that as well as this one-off support, a kind man called Bill has offered significant on-going weekly support for Jodie for as long as she continues her studies. This will make a huge difference to Jodie’s life and will mean she can focus on her studies, and on enjoying her life - without being burdened without the constant worry of how she will support herself.

As well as financial donations, we received so many gift cards, presents and messages for Jodie. There are too many to thank individually, but please know that every gift and message has been passed along to Jodie, and she is so grateful for every single one. Here are a few highlights! 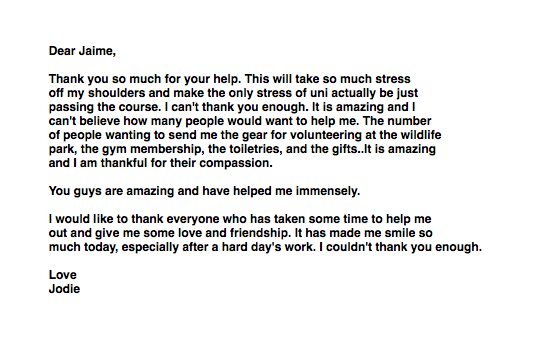